Published: as it was in May 2001, the political analysis isnt accurate anymore.

And its also really REALLY depressing to uber-liberals such as myself.

Denise Bentleyrated it2 of 5 stars 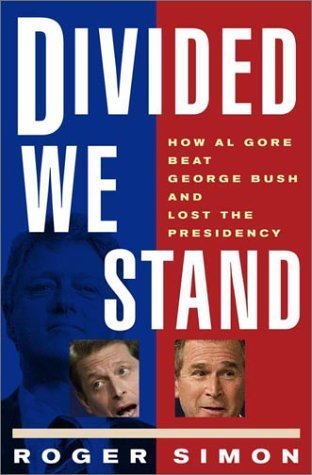 Divided We Stand: How Al Gore Beat George Bush and Lost the Presidency by Roger Simon
as it was in May 2001, the political analysis isnt accurate anymore.

And its also really REALLY depressing to uber-liberals such as myself.

Denise Bentleyrated it2 of 5 stars

Bush, Al Gore, and, yes, Bill Clinton, to see who would dominate American politics.Simon reveals how the two candidates struggled to contend with the long shadow cast by Bill Clinton and the endless psychodrama of his presidency. Both studied Clintons precision use of politics and his beguiling employment of stagecraft, avoiding hot-button issues and trying to become, as Clinton had been, First Friend to the nation.

However, while Al Gore viewed the presidential race as a job interview, George Bush viewed it as a date.Divided We Stand is a book that makes news. Simon provides never-before-revealed details of the rift between Clinton and Gore, including Gores secret plans if he had replaced Clinton during the Monica Lewinsky scandal of 1998.

Simon also reveals how Clinton tried — and failed — to pick Gores running mate in 2000 and offers new details of how Joe Lieberman snared the spot on the ticket.Simon further exposes new and shocking details about how the dirtiest politics of the 2000 race — the deplorable smear campaign in South Carolina — kicked off a campaign of open warfare between John McCain and George W. Bush.

Readers will also learn:* How Ralph Nader affected the outcome of the race and how he feels today about his role.* How Al Gore lost his home state and why George Bush did so poorly with African American voters, even after wooing them so hard.* How Republican Congressional staff members were so angry about union and black turnout for Al Gore and other Democrats that they held a secret meeting after the election to study ways of depressing black and labor voter turnout in the future.* Why the race was so close and what it means for the future of America.* Why, for better or worse, Bill Clinton continues to dominate our political landscape.Divided We Stand is the story not just of a campaign, but of a country.

Simons account will make you ask yourself what you might have done differently had you known what lurked in the corners you could not see.Gore turns from the car and heads quickly down the passageway, a Secret Service agent preceding him. . . . Sir, David Morehouse, his trip director, says, trying to match him stride for stride, we need to go to hold.Gore gives him a look that could toast bread.

Im not going to hold, he says. He picks up his pace. Morehouse has been having trouble with a stiff knee and now he is hobbling after the vice president. Sir, we need to go to hold! Morehouse says, praying the vice president does not ask him why. In point of fact, Morehouse does not know why.

He just knows that moments ago his cell phone rang with a frantic call saying that the vice president should not, could not, must not go out to the plaza and concede defeat.Over his shoulder, Gore now explains to Morehouse why there will be no delay.

I just talked to the governor, Gore says. He already conceded to Bush in a telephone call a few minutes ago back at the hotel. . . . Hes waiting on me, and Im going straight to the stage, Gore says.With Gore now almost at the bottom of the steps and Morehouse running out of any option he can think of, he limps quickly in front of Gore and blocks his way. Just blocks it. Just like that. Morehouse is six-foot-one and solidly built, and now he is blocking the path of the vice president of the United States. Gore is six-foot-two and a weightlifter, but if it is still possible to have something beneath your dignity after running for president for eighteen months, then wrestling one of your own aides to the ground is beneath his dignity.Gore stops short and glares at Morehouse.

Both of them can now hear the crowd noise from the plaza. The words tumble from Morehouses lips. He isnt even sure what he is saying, but it goes, Sir, you need to get to the hold for five minutes. Daley has to talk to you. Its going to be fine- its going to be fine.— from Divided We Stand